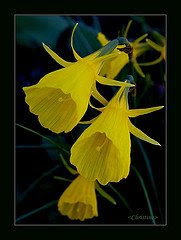 First, the bad news. I lost a whole lot of excellent training material when my memory stick failed. A couple of weeks' work saved on the stick and now just refusing to show up on any of my computers.

Of course, as anyone with an ounce of computer sense will tell you, I should have backed up. It's the sensible thing to do and the obvious. But, lulled into a false sense of "it'll never happen to me", I didn't and now I'm paying the price in re-work and lost time.

Now on to the good news. Here in the UK, it looks like Spring has finally sprung. We've had the most glorious blue skies for the past week. The beach has been golden, the sea shimmering, and the air warm.

So, of course, you're dying to know: what connects the two?

On our Time Management courses at ManageTrainLearn, we like to introduce our trainees to the Four Elements approach to managing time. Briefly, this approach divides up time tasks into four, each associated symbolically with one of the four elements of life. So, fire is activity and busyness; water is working with others; air is non-doing activity, such as thinking, planning, and preparation; and earth is routine, repair, and, yes, you've got it, maintenance.

That means taking time regularly to do some work on your goals and projects (fire), some work with others (water), some non-active work on thinking and recuperation (air), and some work on tidying up, going back to one's roots, cleaning out, and organising (earth).

Clearly, I hadn't been giving enough attention to my earth tasks and Mother Nature was waiting to give me a lesson.

For last week, as the sun came out day after day, I attended to... guess what? Yep, maintenance tasks around the house and garden. Me, who had forgotten the simple maintenance task of backing up my work, was getting stuck into Spring cleaning!

That's when it dawned on me that just as we need the four elements in our own lives, Nature performs them naturally. Winter for plans; Spring for maintenance; Summer for activity; and Autumn for time with others.

I hope this is a lesson I've learned: to give as much attention to the maintenance of my life's routines as I should to bringing work assignments in on time or spending time with colleagues or just sitting and dreaming.

After all, as someone reminded me when I told them this story, the word "maintenance" is derived from the Latin word "manus", meaning "hand" or "tool".

"The Thrill of the New" 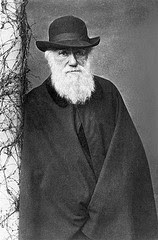 The first was the announcement that last December's jobless increase in the USA, at 693,000, was the biggest rise in a single month since October 1949.

The second was the news that February was the 200th anniversary of the birth in Shrewsbury, England of the naturalist Charles Darwin.

Now, what, you might think, could possibly connect the two?

Well, in one word: change.

Those newly-jobless workers in the USA, together with the 12 million already out of work, plus others in similar positions all around the world, meant huge numbers of people facing major changes in their lives. Each of these individuals will have to face the loss of a daily routine, the loss of friends and co-workers, and the loss of material things such as money, possessions, and possibly even their homes.

On our Change Management courses at ManageTrainLearn, we often quote the researcher Charles Garfield. Garfield studied 500 peak performers in different industries to discover why they were so successful. His conclusion was that they were not necessarily the most talented or the most able or even the most lucky. The one thing they had in common was their ability to respond to change in their lives.

Garfield discovered that, for these people, change isn't something to be avoided, feared or resisted but an exciting opportunity to grow. For them, change doesn't mean "more"; it means "new". New learning, new skills, new attitudes. And, yes, new routines, new friends, and new lifestyles.

Which leads us to Darwin.

Like Garfield, Darwin came to the exact same conclusion about the success (ie survival) of the natural species of the world, ie that, when faced with changes in their environment, the species that survive and thrive do one thing that the unsuccessful and doomed don't do. They adapt.

Darwin's remarkable achievement, of course, was that he proposed it at a time when the idea was completely unacceptable, almost as heretical as Galileo's proposition, 300 years earlier, that the Earth revolved around the Sun. And probably his most heretical proposition was that it is not only the plants, the birds, and the animals of the earth that survive by embracing change and as a result change themselves. It is also people.

If you are one of the many who are facing huge life changes right now, the first thing we should offer you is the compassion that comes from understanding that loss of what you are attached to can come as a major shock. But following that, I hope you will understand that the loss of the known is an opportunity to discover the thrill of the new. For with the new, comes the chance to adapt, learn and change.

Little wonder that on our Change Management courses, we love to inspire people facing change in their lives and work with this quote attributed to Charles Darwin himself: "It is not the strongest of the species that survive, nor the most intelligent, but the ones most responsive to change."

PS At ManageTrainLearn, we like to think that we offer you and your team the means by which you can change your lives. Whether you are facing imposed change or self-initiated change, we have the skills and the products to help you meet new challenges. Take a look now at what's on offer at ManageTrainLearn and when you're ready, download the products that will help you survive and thrive. Remember, there is only one part of the world that lies undiscovered. And that's You.
Posted by Eric Garner at 07:01 No comments:

"Making an Ass Out of U and Me" 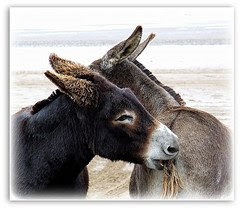 As the hours wore on, and the promised phone call didn't materialise, I convinced myself that my prospective client had changed his mind, got cold feet, or that the arrangement wasn't that good anyway.

On day 3, the call came from my client to say that he had gone down with a sudden bout of late winter flu and had been too ill to get a message to me.

The deal was back on and I felt suitably ashamed.

On the Communications courses that we run at ManageTrainLearn, we invariably end up at some point discussing the dangers of expectations and assumptions when communications break down.

On one course, I well remember hearing how a young manager paid a heavy price for making a wrong assumption.

He had applied for his dream job, got through the first rounds, and was sitting in the interview room along with 7 impressive-looking and impressive-sounding other candidates.

When he went in to the interview room, he performed out of his socks and was duly asked what salary he wanted. Fearing that he might outprice himself and let one of the other candidates in, he said he would take what was on offer.

He was duly awarded the job.

Just after starting, he met with his boss and mentioned how fortunate he felt about being offered the job against such strong competition.

"Oh, no", said his boss. "Those others weren't in for your job. They were there for another one. You were the only candidate. We were delighted to get you for what you wanted."

My friend, trainer Jen Ellis, says that when we assume things, we make an "ass" out of "u" and "me".

And that's how I felt about my assumptions about my client.

So, this week, when things don't add up, or go as planned, or there are bits missing from the picture, I won't jump to conclusions or worst-case scenarios. I'll simply suspend judgment, keep an open mind, and let whatever happens, happen.
Posted by Eric Garner at 01:49 No comments: 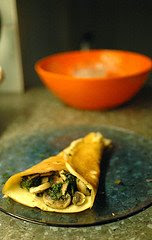 This week, on Tuesday night, we did something that we've done every year on the same night for as long as I can remember.

We made and ate pancakes, it being Shrove Tuesday, or, as we say in our part of the UK, Pancake Day.

Now we didn't do it because of any religious belief, or because we wanted to use up all our eggs and flour before the start of Christian Lent. In fact, if pushed, I'd have to admit that there was no logical, practical, or sensible reason why we did it. There was only one reason.

By one of those odd coincidences, I also happened this week to be discussing tradition with a friend who is a financial accountant and a Scot.

He was fairly distraught that this week the bank that he was once so proud of, the Royal Bank of Scotland, had announced the highest-ever losses of a British company, a staggering £24 billion loss.

My friend recalled the days back in Scotland when that self-same bank stood for what he called "traditional banking values" of thrift, caution, reliability, modesty, and customer closeness. Now, he said, they stood for the opposite: recklessness, risk, unreliability, high-living, and customer alienation.

I don't know if there is any etymological connection between the word "trade" and the word "tradition". But I think there should be.

Alvin Toffler once said that "an organisation's belief system is as important as, if not more important than, any of its other systems, including its accounting systems". And he was right.

The banks around the world that discarded their traditions of thrift and caution in pursuit of risk and greed may well rue what they've lost. As should we all.

I hope we'll continue to celebrate Shrove Tuesday for as long as I live. Not because it has any return on investment (perish the thought!) but because it's fun to do and re-connects us with the good things from our past that we carry with us into the present and future.

As Melanie Pike said about those banks that discarded their legacy, "The trick for lasting success: be cautious. Be a little old-fashioned. Be modest and stay close to your customer. And above all, respect your traditions."

PS At ManageTrainLearn, we like to think that we adhere to some good old-fashioned traditions. Like putting you, the customer, first. Like great products that really do change the way you live and work. Like value for money. And, if we fail to come up to the mark, then we also adhere to that other old-fashioned tradition of putting it right at no cost to you. We think those are traditions worth celebrating.
Posted by Eric Garner at 00:24 No comments: