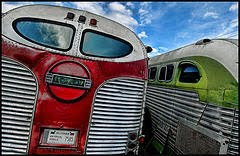 The other night, my wife and I took a coach trip that was labelled a "Magical Mystery Tour".

Unlike most trips we go on, where we know the destination, this one had no end point. It was just a journey for the journey's sake. And we loved every minute of it.

We went along coastal routes lit by beautiful evening sunshine, along country lanes still glistening from the day's showers, and along busy dual carriageways at top speed.

It got me thinking that one of life's real secrets is not about getting some place quick but about enjoying the journey on the way.

Most of us have it the other way around.

We set ourselves goals, such as having lots of money, fine homes, big cars, luxurious holidays, the latest gadgets, and often stress ourselves out trying to get them and keep them. The process of working towards these goals is often classed as a "struggle" where success is measured by how well we perform and how well we compete. We believe that the more we want, the more we have to struggle. And then if and when we reach our goal, we have a momentary feeling of triumph, after which it's all taken for granted and we move on to the next goal and the next struggle.

There is an easier way to get what we want and that is to set the goal and then forget about it by just relishing every single moment of the journey.

One of my favourite authors is Benjamin Hoff. In his book, "The Tao of Pooh", Hoff uses the adventures of Winnie the Pooh to give some important life lessons. In one passage, Pooh contemplates what his favourite thing is. He is about to answer, "honey, of course", when he realises that the anticipation of the honey may be more important.

"The honey doesn't taste so good once it is being eaten; the goal doesn't mean so much once it is reached; the reward isn't so rewarding once it's been given. That doesn't mean the goals we have don't count. They do, mostly because they cause us to go through the process, and it's the process that makes us wise, happy, or whatever. If we do things in the wrong sort of way, it makes us miserable, angry, confused, and things like that. The goal has to be right for us and it has to be beneficial, in order to ensure a beneficial process. But, aside from that, it's really the process that's important. Enjoyment of the process is the secret that erases the myths of the Great Reward."

The really amazing thing, of course, is that when you relish the journey, you don't need a destination to make you feel good. You're already feeling good. So, in one of those odd paradoxes of life, the journey really is the destination.

Here's looking forward to the next Magical Mystery Tour!
Posted by Eric Garner at 03:01 No comments:

"Wanting What We Can't Have" 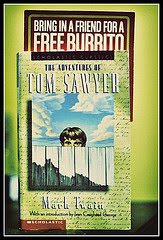 A week or so ago, my wife and I were browsing in a second-hand shop when we came across a beautiful pine corner unit that was perfect for our newly-restored living room.

Being cautious, we decided to think it over and return in a few days' time.

When we did, we discovered that the unit had been reserved for someone else. We had lost the sale. And we now wanted it more than ever.

In our Negotiating Skills courses at ManageTrainLearn, we train people to use this tactic consciously. As an example of how it's done, we show how Eskimo hunters get the best price for their hides from their traders by downplaying the value of their hides, even to the extent of pretending that their furs are not worth looking at. Fearing that they won't get them, the traders are more desperate to buy and so increase what they are prepared to offer.

A similar trick of reverse psychology is played by Tom Sawyer in Mark Twain's book of the same name.

The young Tom has been conscripted by Aunt Polly to whitewash a 30 foot long, 9 foot high fence and, being work not play, he is not in the least interested. Moreover, Tom hates the thought of being ridiculed by his friends.

As each boy passes by on the lovely Summer's morning, Tom pretends to be doing something that no other boy gets to do. He builds up the specialness and importance of his task so much that not a single boy can resist begging to have a go at it. And they're even willing to pay for the privilege.

Naturally, Tom leads them on so that (a) he reluctantly lets each boy have a go at the job, only, of course, on condition that they do it in the very special way that it's supposed to be done, and (b) extracts a good swap from each boy in the process.

Very soon, while Tom idles in the sun with his bounty of swaps, the long fence is painted by a procession of boys who can't wait to accept the new challenge and the new experience.

Mark Twain adds, "And Tom discovers, without knowing it, a great law of human action, namely that in order to make a man or boy covet a thing, it is only necessary to make it difficult to attain."

I don't suppose I'll ever know if the Reserved Sale sign on our pine unit was a ploy for a sale. However, just a few days later, the shop rang to say that their sale had fallen through and we could now have it.

Naturally, like fur traders, and boys in the American South, we couldn't wait to snap it up.
Posted by Eric Garner at 00:14 No comments: 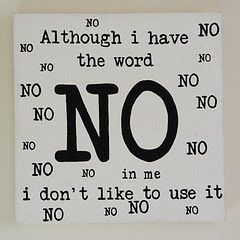 If, like me, you run your own business, you'll know how easy it is to take on jobs that are not really yours and that you don't have time to do.

We do it because (a) we believe we should; (b) we believe it will make others grateful; and (c) because we believe we are helping. In fact, the real reason may be none of these. We may just be unable to say that 2-letter word, "No".

Over the years, my inability to say "No" has landed me in frequent hot water: jobs that I promise to do straightaway, jobs that were far too big for me to do alone; and jobs that weren't any of my responsibility in the first place.

So, over the years, I've developed 3 preliminary rules to remind me that I really should be more assertive when responding to requests. These rules are:

1. checking whether it's really something I'm contractually obliged to do. If it's not, I think twice.
2. thinking through whether I really want to do it, or whether I'm just being nice to the other person.
3. working out whose problem it is and if it's there's not mine, believing it is better for all concerned if they work it out for themselves.

Having done this, and believing that I am entitled to say "No", I then employ a range of stock responses which include:

I've also recently adopted the Covey technique of saying "No". This comes from Stephen Covey who in his book "The Seven Habits of Highly Effective People", tells a story of trying to off-load some work onto a busy colleague. The colleague gently took Stephen to a wallchart on which were listed her current projects.

"Stephen," she said, "I'll do whatever you want me to do, but tell me. Which of these projects would you like me to delay or cancel?"

Stephen smiled and decided he didn't want the responsibility of interfering with his colleague's workload and went off to find a less accomplished and less assertive manager to do his work instead.

I still have relapses with saying "No" and I'm still learning. And, if I still can't remember my 3 rules, my one-liners, and the Covey technique, I've one last trick up my sleeve.

I just tell them that I'm learning to be assertive with my time management and would they mind terribly much if on this occasion, for just this once, I said "No".
Posted by Eric Garner at 00:50 No comments: