"The True Spirit of Christmas" 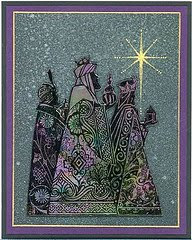 With Christmas just around the corner, and all my children away from home, my thoughts this week went back to the Nativity plays that we used to go to when they were at primary school.

I remember in particular one year when my youngest son played one of the Three Wise Men. He was only 6 and was supposed to hand over his gift of frankincense, a beautiful box made from a cereal packet that my wife had spent all night decorating.

He loved that box so much that when his turn came to hand it over to the baby Jesus, he wouldn't part with it. We, along with the whole audience, held our breath as he stood there unmoved. One of the teachers went up to him, spoke quietly in his ear, but he just shook his head defiantly. The teacher spoke to him again and this time he looked up to her as if to say, "Will that be alright then?", and then reached into his pocket and gave baby Jesus a bag of marbles.

I often remember his little gift when I watch the frenzy of gift-buying at Christmas. Every year, I wonder how much more meaningful it would be if, instead of giving shop-bought and Internet-bought gifts running into hundreds of pounds, we simply gave our friends and loved ones something uniquely of ourselves.

Paulo Coelho re-tells an Austrian legend about the Buckhard family, a man, woman, and boy, who used to amuse people at Christmas by reciting poetry, singing troubadour ballads, and juggling.

When the boy grew up, he told his parents that he wanted to take his first step to do what he had always dreamed of and become a priest.

Although they were poor, and hated to see him go, the family respected his wish and allowed him to enter the monastery at Melk.

That Christmas, a special miracle happened at Melk when Our Lady and the baby Jesus descended to earth to visit the monastery.

All the priests lined up to pay homage to the Madonna and her son. One priest brought a beautiful painting, another presented a hand-written Bible, and another recited the names of all the saints.

At the end of the line, young Buckhard waited his turn, with no gift to bring.

Finally, when his turn came, the young man stood before the Virgin and child. Feeling ashamed before the reproachful looks of the other priests, he reached into his pocket, took out some oranges and began to toss them into the air and catch them with his hands, just as he and his family used to do when they travelled to all the fairs in the region.

At that instant, the baby Jesus, lying in his mother's lap, clapped his hands with joy. And it was to young Buckhard that the Virgin held out her arms to let him hold the smiling child for a few moments.

This Christmas, whether you are struggling in the recession with no job and no money, or sipping champagne as you count your end-of-year bonus, I hope the most appreciated gift you give to others is the gift of yourself.
Posted by Eric Garner at 02:41