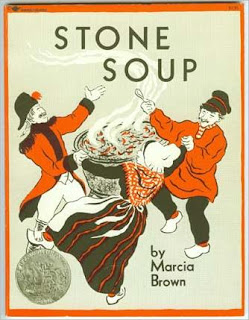 For those of you are regulars of the ManageTrainLearn blog, you'll know that I love stories that coach.

Stories that coach are great ways to learn. They are fun to listen to and easy to remember. And the best stories always bring a smile to people's faces and a glow to their hearts.

If you want to see what I mean, read the following story on teamwork and the company of those we care about. It's called "Stone Soup".

There exists a tale, handed down from times long ago, of two travelers on a pilgrimage. Hungry and tired from a long day’s journey, they come to a small, impoverished village, where they decide to rest by the side of the road. One of the travelers builds a small fire, upon which he places a large pot, while the other, having drawn water from the town well, fills the pot and places into the vessel a simple stone. As the two men sit by the fire, bringing their "stone soup" to a boil, the local villagers become inquisitive of the curious antics of these strangers. Eventually, several townsfolk decide to investigate the matter and approach the two travelers to engage them in conversation.

Shortly thereafter, there is heard the sound of merriment, as the visitors, who turn out to be quite friendly, share their tales of the lands and people they have met throughout their journey and pilgrimage with the local villagers.

Finally, a young boy asks the travelers "But why, pray thee, are you boiling a stone?"

One of the pilgrims replies, "So we may eat stone soup."

"It must be terribly bland!" says an old woman. "But I have a cabbage, which will add some flavour!"

"And I, some carrots, which will add colour!" says another villager.

"Some potatoes!", offers another, until, shortly, by the contribution of a little by many, a hearty stew was made, upon which the entire village and the weary pilgrims dined... and while doing so, shared their tales, talents, and camaraderie throughout the night.

The very next day, the travelers (who by now could be called "strangers" no more), continued their journey, leaving the little town, and its people, behind. But the villagers never forgot them, and the lesson they had learned. In fact, during the hardest of times, in such a time as this tale, that little village thrived, because the townsfolk never forgot how to make "stone soup".

I love this story for its simplicity, truth, and wisdom. And, just like the villagers, I've added it to my blog in the hope that you, too, will never forget the lesson and pass the story on.
Posted by Eric Garner at 10:53