"Putting Your Money Where Your Mouth Is" 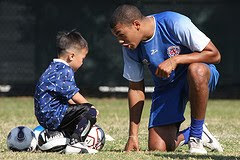 The other day I read a newspaper article that challenged everything we'd ever thought about using praise to motivate people.

It came from research done at Stanford University, California, which found that students who are repeatedly praised become risk-averse, make less effort, and are less motivated.

According to Professor Carole Dweck, praising a student too often fails to help them for three reasons. First, they think they've succeeded so they don't try as hard. Second, praising them puts them under more pressure to do well with the result that they try too hard and fail. And, third, they know that sometimes praise is used as a not-so-subtle way to bribe them to do what others want.

But, of course, that doesn't mean you should stop praising people. In the right place, and given in the right way, genuine praise for a job well done is one of the keystones of managing people. What this new research suggests is that we should do it in a way that doesn't put people under pressure but helps them do even better.

There is a true story about Nathaniel Hawthorne, the American novellist, before he became famous.

One day, he came home from his job at a custom house to tell his wife, Sophia, that he had been fired. Heartbroken, he declared he was a failure.

To his surprise, Sophia exclaimed with joy, "But now you can write your book!"

"How can I?" he replied with sagging confidence. "What will we have to live on?"

To his amazement, Sophia opened a drawer and pulled out a large sum of money.

"Where on earth did you get that?" he exclaimed.

"I have always known you were a man of genius," she told him. "I knew that someday you would write a masterpiece. So, every week, out of the money you gave me for the housekeeping, I saved a little bit. There is enough to last us for a whole year."

By the end of the year, Nathaniel Hawthorne had written "The Scarlet Letter", which was destined to become one of the greatest novels of American literature. And all because of the trust and confidence of his wife in him.

If you want to motivate your staff, don't just praise them. That's easy. Show them that you believe in them with deeds as well as words. That's hard. But it's effective.

Lesson? Put your money where your mouth is.
Posted by Eric Garner at 00:06 2 comments: